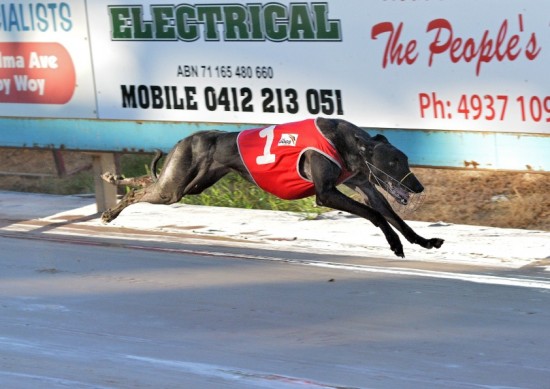 KENSA will return to The Gardens on Friday evening following a brilliant debut last weekend, clocking 22.68 over the 400m trip.

The daughter of Spring Gun and Little Bit Fancy was quick to begin off the cherry and was never in danger, scoring by seven and three quarter lengths on the line.

Trained by Michael and Jodie Manuel, Kensa will jump from box two in race 11 on Friday night, with Jodie very happy with her progress leading up to the race.

“She has pulled up really well after her last run and she had a nice hit out up the straight at Keinbah during the week,” Jodie said.

“She got checked again last night (Wednesday) just to make sure she was ok, but there were no problems.”

Kensa is eligible for the 2016 Richmond Riches race series which will be held in May and is worth a massive $100,000 to the winner. While the race is held over the testing 535m trip, Jodie is optimistic that Kensa will be able to run out the distance.

“Her run home last week was the quickest she has gone yet, but it was also her first time at The Gardens on a race prepared track.

“Based on that time I think she should get the 500, so we will be taking her down to Richmond soon for a couple of looks at the track before the series.

“One thing about her is she always goes flat out – she is a little trier.”

Shares are still available in Kensa. For more information or to purchase a share contact Syndicate Manager Tatum Osborne Young on 0429 090 683.

Kensa’s race is scheduled to jump at 7:12pm AEDT.