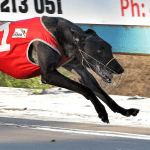 Kensa was purchased for Race A Chaser Syndications at the Richmond Puppy Auctions in 2014 from the acclaimed breeders Dennis and Anne Barnes and is a daughter of Spring Gun and Little Bit Fancy.

Kensa broke in sensationally at Cudal, which is run by Dennis and Anne Barnes, and has been in pre-training in the Hunter Valley since September 2015. During that time she has continued to learn and improve and we are confident that she will develop into a talented TAB class greyhound.

Kensa, whose kennel name is Coco; had her first official run on a racetrack on February 18, 2016, when she stepped out in a performance trial over 400m at Gosford.

Kensa showed plenty of potential in that run, working hard to find the front around the outside of another greyhound and holding on to win by three quarters of a length. Kensa clocked 23.19 over the track and trip which would have won four of the six races over the distance that day.

We are confident that Kensa will continue to improve off that run and will mature into a very nice race bitch, another positive being she has plenty of time on her side to do so as she does not turn two until May 2016.

Kensa is currently being trained by Michael and Jodie Manuel in the Hunter Valley, NSW.

By purchasing a racing share in Kensa, you also guarantee a share in her future breeding career. With such impeccable bloodlines, she could prove to be invaluable when the time comes to head to the breeding barn.

The official registered owner of Coco is the Race A Chaser Coco Syndicate. The syndicate has a total of 20 shares available for syndication.

The Syndicate Manager for Coco is Tatum Osborne Young who has a great deal of experience within the greyhound racing industry and is the manager of several other successful syndicates across Australia.

The price per share will be $2,750 including GST. The cost per share may increase or decrease as Coco’s market value increases or decreases throughout her race and breeding career.

It is a requirement of all Race A Chaser syndicates that potential owners download, read, understand and sign the Product Disclosure Statement (PDS)

Spring Gun is a son of the great Bombastic Shiraz (Black Shiraz x Bombastic Blonde) out of Ready For Rain (Big Daddy Cool x Ready To Rise). Spring Gun was trained in NSW by Christine Oldfield and was whelped in June 2009. The red fawn speedster won 18 of his 27 starts with one second and one third, his best win coming in the 2011 Group 1 Vic Peters Classic over 520m at Wentworth Park.

Little Bit Fancy is an exceptionally bred blue bitch which had 22 starts for eight wins, four seconds and two thirds including a 29.61 victory at Sandown Park and a 17.16 track record performance at Coonamble over 301 metres.

Little Bit Fancy has had two litters (including her Spring Gun litter) so far, her first litter being a 2013 mating to Head Bound which produced nine pups. Every pup from the first litter has won races, her most notable offspring being Amelia Christa, Fancy Dancer, Fixate, Little Bit Slick and Upstate Fancy.