Flash was purchased for Race A Chaser Syndications at the Greyhound Racing Victoria (GRV) Ready 2 Race Auctions. The race series included the $35,500 Ready 2 Race Championship at Sandown Park in November 2015. The top eight prize money earners at the time of each of the bonus races were automatic entries in to the race.

Jaguara is a son of Milldean Panther and Flamingo Sands. Race A Chaser purchased him on the basis of his two trials during the R2R race series (see below) which demonstrated exceptional strength in the run to the line, suggesting potential for a middle distance or staying career. Flash’s run home time of close to 12.50 was near best of day times; and he showed tremendous improvement in track sense between his heat and final trial. Being only 19 months of age at the time, we believed considerable improvement would occur through natural maturity and field experience.

Additionally, it was our expert opinion that the greyhound was running with injuries that could be fixed, and that he had much more ability than was being exposed. On examination that proved to be the case, with Flash suffering from significant muscle sprains in the left hind hip support and triangle muscles; and extreme pain in his neck, mid back and low back – which explained completely his inability to jump cleanly or quickly from the boxes. He was also suffering from radiating pain from nerve entrapment through his right shoulder and wrist.

Flash has since been examined and treated by leading Victorian greyhound vet Dr Barry Haywood who has treated the muscle injuries and performed spinal manipulation to rectify Flash’s issues. It is our opinion that Flash would demonstrate far more stamina in his races now, and that it would have been very difficult for him to race with the problems he had.

Race A Chaser believe that Jaguara may prove to be a “diamond in the rough”. He is not fashionably bred, he does not have superior damlines, he has not yet run times that would suggest he is capable of city class racing. But he has shown stamina superior to many greyhounds racing, he has shown he will compete in his races, and he has demonstrated some track sense in a half field. We consider Flash one of our more exciting greyhounds with the potential to become a very valuable greyhound if he can run the staying trip of 720m.

That early belief has since been confirmed with Jaguara scoring a devastating maiden win at just his second race start, running the second fastest run home time in history over Bendigo’s 500m trip when winning by a huge margin.

The official registered owner of Flash is the Race A Chaser Flash Syndicate. The syndicate is currently sold out.

It is a requirement of all Race A Chaser syndicates that potential owners download, read, understand and sign the Product Disclosure Statement (PDS)

Milldean Panther is an Irish greyhound who has very few litters on the ground in Australia, but has already sired boom youngster Whittaker who has run 29.55 at Dapto. On the racetrack, Milldean Pather was considered the best greyhound of his time, winning his first 12 races in a row by big margins and setting the Shelbourne Park track record over 525 yards. His racing career ended prematurely due to injury and he was retired to stud.

Flamingo Sands was averagely performed on the track winning at Geelong. She has one previous litter on the ground to Our Toyman that produced 5 winners from 6 greyhounds. Two littermates have raced from the Milldean Panther litter, with Bombora Storm trained by Darren McDonald recording a 26.54 maiden win from just three starts with a further placing.

My Nightingale was very well performed on the track winning 12 races from 70 starts with a further 25 placings and $37,235 in prize money. As a broodbitch, she has produced seven winners from 14 greyhounds across her two litters to Andy Palmer and Surf Lorian. 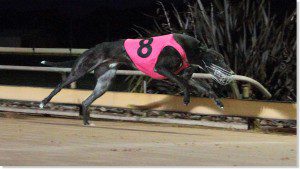